Rust speckles her body like leaves freshly fallen on a withering lawn, blemishing any surface that once shone. Dust has become fundamental to her being. Her loose fenders jiggle with a twang if I make too sharp a turn. When I pull on the brakes, their only contribution to the slowing of my momentum is an intermittent scraping noise. She has lights, both in the front and in the rear. They work only at wheeze-inducing speeds and their archaic cloth-covered wires fray at the connections. Despite the twenty-one possible combinations of gears, I’ve given up on trying to switch them. There seems to be an arrangement she prefers, and that one works best for me. I trust her. I know that because of her age I can depend on her without worrying about scratching her or going over too steep a bump. I know she was made with a craftsmanship that no longer exists.

I once promised myself that I would never again buy something new, finding that I was always more satisfied with the purchase of something used. I’ve always felt myself drawn to old things. I imagine when I say “old things” a reader might think “antiques.” That is not what I mean. An antique is an overpriced piece of furniture that married couples from New England look for on their weekends. Old crap, as vague a term as it is, is different. It is something I’d find by perusing someone’s garage on a Saturday morning, after lengthy negotiations with a scrap yard owner or on the ‘free’ section of craigslist. Junk is what mysteriously enchants me, but why? I can’t help but see parallels between my connection with my bike and how any strong, human relationship should be. What I think defines a meaningful bond between people is a sense of comfort. In a good relationship, you don’t have to worry about minor social faux pas, like sending three text messages in a row or not immediately responding to someone’s Facebook post. You feel comfortable enough in the strength of your relationship that those petty issues don’t matter. Because of the age and condition of my bike I feel this same sort of ease. If I had a new bike, I’d be concerned about scratching its shiny paint trying to remove it from the metal disentanglement puzzle that bike-parking stations present. But with my bike, I know it understands when I am rough with it. I feel comfortable with it because of its age.

However, I don’t feel satisfied by concluding that l like old things simply because I feel more comfortable with them. We live in a time of relative ease, where one can know or obtain anything almost immediately. But say I need to get a certain valve to build a potato cannon. I could spend five minutes and buy one cheaply online, or I could spend a day looking for it through alternative means. Almost always I would choose the latter option.

” When I am scrounging around a tag sale, my hunting instincts from our days as cavemen kick in.”

While there are junkyards and tag sale stores that sell the junk I’m interested in, they are never organized, nor do they have items regularly in stock. I choose this route because I get a primal pleasure from digging for something amongst literal mounds of detritus and a thrill from gambling my time where I can come out empty handed. When I am scrounging around a tag sale, my hunting instincts from our days as cavemen kick in. From my years of doing this, just by catching a glimpse of a tag sale from the periphery of my vision I can tell whether or not it will be fruitful. I feel in my element when I am on this hunt, and I love that feeling.

When I found out that MIT was hosting the last Swapfest of the season I decided to go, despite not having anything on my shopping list. I couldn’t resist the temptation of scooping through piles of surplus components. I walked through the maze of stalls crowding the empty parking lot, their tables overloaded with anything from outdated and elaborate chemistry equipment to scrapped electronics. I stopped at one and passed a pneumatic actuator between my hands, thinking of some excuse to buy it. It consisted of an ebony-stained wood-paneled dial in front of a network of small bronze tubes. Just the patina of the metal was enough to attract me to it, but the intricacy of the little pipes kept me puzzling long enough for me to worry that the seller would think I wanted to steal it.

I heard the vendors in caring conversation with their customers. With genuine interest, a used electronics dealer asked a shopper what he needed a certain component for, and offered his advice on how to solve the problem. After half an hour of meandering, I noticed that a scrounger and a seller were still in the same lively conversation that had already been going on when I walked in. From the little bits on which I eavesdropped, I gathered they were reminiscing about their experiences with radio tube amplifiers. Seeing the spontaneous community that arose out of the flea market reminded me of another aspect of old things that I love: how they draw people together and foster an exchange of ideas. Anybody who is selling something used from a stall was once in the exact same position his customers are in. Flea market vendors don’t hawk their wares merely to make money; they do it to share a passion. Consequently, I get more out of buying something second hand because I inevitably end up in an interesting conversation with someone who has a lot more experience than I do with the hobby or history involving that object.

After I left the flea market I stopped for a moment and looked at my rusty bicycle. As I stood in admiration, ignoring all the people ogling at the weirdo staring at his bike, I thought more deeply about what drew me to it in the first place, before I had developed any level of comfort with it. I found it in a junk pile by a sidewalk, so I didn’t associate it with any memories of an interesting person. I noticed that I simply loved how it looks, how it feels, the aesthetics of the bicycle. For me, the natural pattern of rust speckles is infinitely more interesting than the fanciest of paint jobs.

“I could see a subtle galaxy from the oils that the deft hands of all the previous users had imparted on the cracked, ebony handle.”

I once bought an old razor at a flea market. I had no use for it; I didn’t intend on learning the skill of straight-edge shaving, but still I fixated on it. The blade had a chip in its edge and the once-stainless steel had a patina of permanent dustiness. If I looked close enough and in the right light, I could see a subtle galaxy from the oils that the deft hands of all the previous users had imparted on the cracked, ebony handle. With a press of my middle finger the blade would still smoothly reveal itself from the handle, but with a gentle resistance. I’ve often fantasized about how it could have become chipped or about all the stories it would know. It is hard for me to describe the exact emotion I feel when interacting with such an object, but my best attempt is a satisfaction with feeling connected to an earlier time crossed with a pure enchantment with the object’s appearance.

I am certainly not alone in my affection for old things. One of my regular procrastination websites features cool new gadgets to waste your money on, but they recently added a new section, “Heritage.” The editors of the blog were asking minor celebrities to submit pictures and a little blurb about an old and beloved item. Many of them shared similar sentiments with me, expressing love for the appearance of the item as well as for the connection to a moment in the past that it represents (Forch). I found some information pertaining to my specific demographic of 20-somethings. In an opinion piece in the magazine Antiques, the author postulates that the recent surge in the popularity of flea markets with people in this age group is best attributed to a form of rebellion. She writes, “More than an interior decorating trend [of shopping for old things], it is an aesthetic manifestation of the generational resistance—some would say rebellion—against a disposable culture of mass-produced convenience in favor of the salvaged, the restored, the highly personal, and the local” (Dailey). I hadn’t explicitly thought of my affection in this way before, but it certainly makes sense to me. I have grown up in a world where products are meant to be thrown away. I can’t buy one toaster for my whole life, because it is essentially designed to fail after a given amount of time. Since I can’t knock on the door of every CEO of a company that manufactures something and ask him or her to make better products, the only weapon I have is to buy old things, things that were built with perennial quality. (The author also goes on to discuss how, as being ‘green’ is very chic at the moment, the recycling aspect of flea market shopping fits easily into that trend. Though, while I certainly think recycling is good, it is not a reason I find immediately pertinent to my love old crap.)

Then, just the other day I came across a blog post about the value of old things, beneath which was an active discussion on the topic. The ideas of one commenter, Sharon, really made sense to me. She wrote, “Old things connect us to simpler times, to our history, and provide an [sic] sense of comfort. We are not alone … we are a continuation” (Sharon). As I read this I realized that the root cause of my attraction to the visual aspect of old things echoes my attraction to the interpersonal aspect, but on a conceptual level. Seeing a beautiful old thing turns my attention to all the countless people who shared the same love for that object whom I will never meet. I feel linked to those nameless individuals just like I feel connected to the junkyard manager giving me advice on a project. In that sense, interacting with old things allows me to transcend time, which is a feeling that a shiny box in Walmart could never provide. 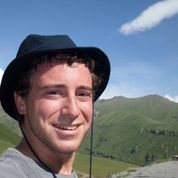 Alex Leffell is a rising sophomore majoring in mechanical and biological engineering. He honed his rummaging skills on the hard streets of New Haven, CT. If you have a keen eye, you might chance to find his head poking out of a dumpster or alleyway with a smug grin on his face and someone else’s trash cradled in his arms. He finds himself to be most comfortable sporting a healthy coat of grime and dust. When he isn’t out succumbing to his hoarding addiction, he can be found staring pensively into the Charles River holding a classic novel that he will get around to reading eventually.
Assignment by Lucy Marx – Personal Investigative Essay/Autobiography