Created for the Bob Marley Museum

Currently on loan at the MIT Museum

Hello, old friend. We’ve never met, but I’ve heard a great deal about you. No, not the man you were crafted after, but you—the incredible holograph likeness of Mr. Marley residing in the MIT Museum, far from Marley’s island of origin in so many more ways than location and temperature. My mother has been bothering me to visit you for months. Although she doesn’t quite understand, she still appreciates my love for Marley, his country, his music, and even more his worldwide message of peaceful rebellion. His songs, the lyrics of which have been engrained in me since I was a small child, swirl in my head as I sit at the base of your stage. They are competing with some typical MIT computer science terms blasting from the exhibit to your left. It is ruining your passionate yet mellow vibe, so I pop in my headphones to let you speak to me directly. “Buffalo Solider” does just the trick to melt away the stress of MIT. I really wish I could have met the man you represent so well, but you will simply have to do. The lines of reality blur as you, 3D Bob Marley, sing me a solo serenade.

What are you thinking as you perpetually stand on this holographic stage? Your face holds a closed eye, open mouth mid-lyric, and a pained expression. I can only imagine the suffering and injustice that the man you represent experienced in his country—my recent visit touched on the outskirts of a tourist hub, but even there I found the struggle of “downtown” Jamaicans. Your dreadlocks are perfectly imperfect, each a different thickness and length, reflecting the mane of Marley’s lion soul. Your clothes resemble a ragged scarecrow stuffed with straw although you represent a multimillionaire. Your unbuttoned shirt is wrinkled and worn. The heart-shaped pockets are outlined with scarecrow straw that sticks out in random directions—I want to reach out and feel the brittleness. Your soft leather boots are a little more appropriate to Marley’s wealth.

“The microphone in many ways is the concept of Babylon that Marley fought against daily, yet it gave him the power to project his message from the persecuted to the entire world.”

As my gaze passes the boots of your shoes and reaches the end of the stage, I am immediately drawn back to your face. Your left hand grips a single dreadlock so tightly that the veins rise up like mountains. The other hand appears several feet in front of you, clutching a microphone—a microphone that seems so physically real that two passersby each reach out and attempt to grab it from you. It’s not quite held with the same care as your dreadlock; it’s pushed as far from your body as possible, like a reminder of its necessary evil. The microphone in many ways is the concept of Babylon that Marley fought against daily, yet it gave him the power to project his message from the persecuted to the entire world. The dreadlock held close to your heart clearly manifests his Rastafarian faith. It has shaped so much of the music I enjoy, though I doubt he would approve of dancehall’s violent, materialistic, and explicit messages.[1] What would he say about sexually graphic lyrics blasting from speakers on street corners? What would he think when artists constantly argue and carelessly throw around murder threats to sell more music? How would he feel if he saw the ongoing oppression of poor Jamaicans? His music and dancehall music express the same wants and needs, but with extremely different delivery. He wanted revolution and fairness—the poster above my bed reminds me each day of his powerful lyrics (Get up. Stand up. Stand up for your rights)—but dancehall uses different methods of revolution, which are not quite so PG.  Through its purposefully explicit and over-the-top lyrics, it allows youth to break from the norms imposed upon them by upper-class “uptown” society. Marginalized youth find a space to cultivate their identities, enhance self-worth, and discuss many unpleasant urban realities. Would he be excited to see youth were taking an active role in a social revolution, or would the content of their musical revolution turn him away in disgust? Dancehall lyrics are banned in several countries, while his lyrics skyrocketed him to international fame. I would argue that your face—holograph or not—is one of the most recognizable in the world.

I start to lose myself in the physical details of your shadow that seems a little offset based on the positioning of the lighting—but wait, there is a spotlight, and within that spotlight is a blurred, bearded man watching over your shoulder. This man, wearing an Aladdin-like hat and robe that covers all but his face, watches your every move. He’s clearly not the focus, but I want to know who is so important as to share the stage with you.  Could he be the one who started the Rastafarian faith? Is he Marley’s inspiration or maybe family? I search the internet until I discover that this fuzzy detail is a portrait of Haile Selassie, the Ethiopian ruler believed by Rastafarians to be the messiah who will lead the people of Africa and its diaspora to freedom. Well, now his God-like positioning and judgmental features begin to make sense.

As I take a step closer, I can see myself in you—no actually, my reflection blurs you as I get a little too close. I long to be able to say that to a living version of you. Although I do not see me in you, I see your values perpetuated in me as I have grown up to your songs. Every day I aspire to get up and stand up for my rights, to worry a little less because every little thing will be all right, and to realize that there really is one love and one heart.

[1] Dancehall is a Jamaican genre of music tied to the beginning of a youth movement that felt more connected to the angry “rude boys” than the idealistic Rastafaris, idolizing the power of the “badman” (thug) in belief that a life of crime was better than that of menial work. 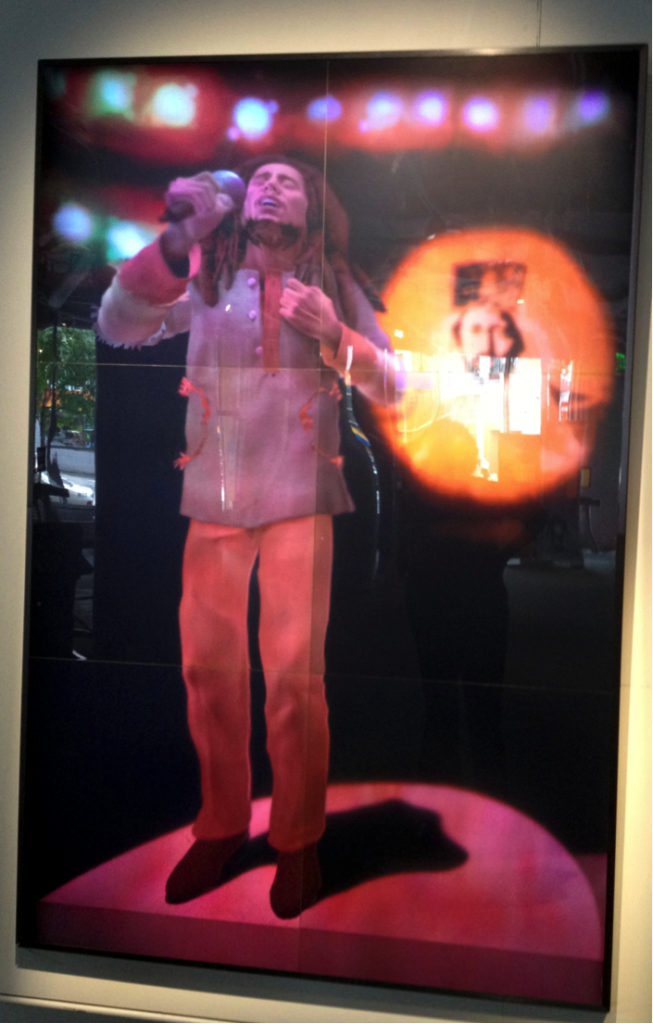 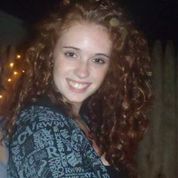 Theresa, an environmental engineer by trade, has always had a passion for writing. Growing up in a small city just north of Boston, she paired her early love for beach exploration with a scientifically trained eye to document her findings. "An Ode to Bob Marley" was a shift back to this style as an exercise in looking--but this time exploring art instead of sea creatures.
Assignment by Lucy Marx – Looking—at MIT