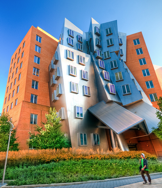 I first saw MIT’s campus as a ten-year-old, through the glossy pages of a coffee-table book. Flipping through the pages, I admired the historic architecture of Walker Memorial, the Sailing Pavilion, and the Great Dome. But on the last page there was a new building that caught my attention: the Stata Center. Every college campus has a dome, statue, or some stately symbol of knowledge. But Stata was different; it felt experimental, playful, and unique. It looked as if a super-strong magnet had accidentally snapped eight-story metal sheets into place. The slanted posture, curvy corners, organic layout, and color scheme created a dreamlike building with creative energy at its core. It was something that I had never seen before.

MIT’s interconnected assortment of architectural designs and building layouts defines the Institute just as much as its history or research does. Buildings create experiences, affecting how people think and communicate. In a way architecture not only defines how we use and navigate a building, but also shapes our dominant impression of a certain place. The design of a building can influence our attitude toward the work we do there and drive us to become better engineers, artists, and hackers.

One particularly transformative era in MIT’s history demonstrates this point. Amidst the smokestacks and asphalt of 1940s industrial Cambridge, a three-story wooden building hastily emerged at the intersection of Vassar and Main Street. The 200,000-square-foot “Plywood Palace” would go on to support nearly four thousand researchers at its peak. The building quickly became a center of discoveries that played a vital role in the Allied war effort: radar, long-range navigation, and weather prediction, among others.[1] Karl Compton, president of MIT from 1930 to 1948, claimed the Rad Lab, as it was often called, was “the greatest cooperative research establishment in the history of the world.”[2] The Department of Defense said in a press release that the lab “pushed research in this field ahead by at least 25 normal peacetime years.”[3] Initially just a temporary lab for radar research, it soon became one of the most admired workspaces at MIT.[4] This creative phenomenon has led historians, architects, and behavioral scientists to try to find the source of Building 20’s success.

Building 20 was the exact opposite of Stata: the roof leaked, the windows squeaked, and the floors creaked. A monstrosity “built of plywood, cinder block, and engineers’ dreams,” Building 20 was ugly and plain, made for utility, not aesthetics.[5] It didn’t even follow Cambridge Fire Code, but was granted an exception given that the building would only stand “for the duration of the war and 6 months thereafter.”[6] The building layout was also confusing; it was divided into alphabetic wings that were assigned out of order. To get to wing D for example, you would have to walk past A and E.

Although the building was meant to be torn down shortly after World War II, MIT needed space, so it quickly moved in offices like the ROTC and Linguistics Department. Inside the building, beyond its nondescript front entrance—a single wooden chair, a gray plastic trashcan, two metal doors, and a white sign that read “BLDG. 20”—was a world of invention: everything from student clubs to the start of multi-billion dollar companies. Most significant for MIT’s research agenda, the building hosted the Research Laboratory for Electronics (RLE), the first interdepartmental lab at MIT and precursor to the Media Lab.[7] Jerrold Zacharias made the world’s first atomic clock within its shabby walls.[8] Edgerton and Chomsky set up their first experiments there too.[9] This is also where the first programmable transistor-based computer, the PDP 1, was designed. While from the outside the building didn’t look like much, at MIT looks can be deceiving.

“Because the building was temporary, researchers had free rein to modify their office space however they desired.”

The interior of Building 20 was an intellectual playground. Because the building was temporary, researchers had free rein to modify their office space however they desired. Repeating themes—fire extinguishers every thirty feet, chairs pushed into every corner, exposed water pipes in the hallways, an organized chaos of people moving down the narrow hallways—made it clear: this place was for experiments. After the Rad Lab moved out, the building’s new inhabitants painted curvy psychedelic designs in the hallways, put up secret ladders to the back entrances of labs, and labeled doors with quotes from fortune cookies, such as “the world is always ready to receive talent with open arms.”[10] It was a place of action, the ultimate lab sandbox: changing furniture or fixtures was never questioned. As one professor recalled:

You know, that if you want to run a wire from one room to another, you don’t plunk down $1,000 to call an electrician…instead you get out a power drill or screwdriver and you jam the wire through. You take care of things right away in one afternoon rather than waiting six months for a purchase order to come through.[11]

This spontaneous quality of modifying spaces also made the building egalitarian. No one fought for fancy offices, because they were all equally plain, but could all equally be transformed. Frank Gehry thought the building resembled the “Temporary Contemporary,” a warehouse that temporarily housed the Museum of Contemporary Art in L.A. in 1983. It was a style made fashionable by its flaws. “There’s a freedom in it,” he declared.[12] In fact, there was so much freedom that Jerome Wiesner, president of MIT from 1971 to 1980, built an office in Building 20, shielded from distractions that he faced elsewhere in the Institute.[13]

With so many creative ideas floating about, people were constantly running into each other and discussing research. A linguist would work next to a nuclear engineer, and they would talk in the elevator, then share their latest findings over lunch. The ease of meeting new people in different fields allowed Building 20 to become MIT’s hub of cross-disciplinary engineering.

In some ways, Building 20 was the perfect startup: brilliant innovators constantly bumping into each other, in a community unafraid of spontaneous experiment. As one professor mused, “Research is risky, new ideas are often wrong.”[14] The Plywood Palace let these prototype ideas roam free.

Some impromptu projects were more formal than others. While Amar Bose was testing his novel speaker designs that later spun off into a thriving business, others were innovating on a smaller scale.[15] Boston Globe architecture critic Robert Campbell mentioned a hacker who “installed a switch beneath a couch, which turned off the motion-detector in MIT’s swimming pool next door, thus permitting undetected late-night swims.”[16] Normally people had less independence and control over their workplace, but here they enjoyed the latitude to construct and modify at will. Little projects like these helped encourage MIT’s modern hacking ethos.

“However, it wasn’t all free thoughts and endlessly configurable office space.”

However, it wasn’t all free thoughts and endlessly configurable office space. For all the social and practical benefits of working in such an autonomous place, the physical construction of Building 20 had real flaws. Its outer walls were filled with asbestos, which released dangerous fibers when walls were torn down.[17] Apart from health risks, the building’s hasty construction also had other unfortunate results. Paul Penfield, Jr., head of the EECS department from 1989 to 1999 shared a unique experience:

One day building maintenance crews were disassembling Rad Lab scientific equipment from the roof. They were moving lead bricks, when one fell onto the roof, punctured through it, and fell through all three stories to the ground. This heavy lead brick just so happened to crash down on Bob Kingston’s thesis, which was a very fragile glass tube. Luckily, however, he rebuilt it in a day in Building 20’s basement glass shop.[18]

In the long run, Building 20’s limitations didn’t interfere with research; they empowered it.

In 1861, William Barton Rogers founded MIT to provide “a broad and solid foundation…[as well as] an entirely practical department” of math and the sciences.[19] MIT’s mission of engaging both mind and hand—Mens et Manus—was established when the Institute was founded. Building 20 acted as a catalyst to further that mission by fostering a dynamic environment in which creativity merged with logic, and research combined with practice. Much of what MIT is known for today—engineering, hacking, and collaboration—was greatly influenced by the activity in Building 20. Although it didn’t ever provide the luxuries of modern buildings, it had the flexibility of an environment that let ideas roam free. It was this culture that led to a creative energy and the spontaneous collaboration that made this the site of MIT’s “Magical Incubator.”[20] Quite simply, Building 20 was a start-up garage. It was a functional place for creative people.

Although a bit of the character of Building 20 might have been captured in the funky shapes of Stata, much of the original innovation of the “Plywood Palace” was lost when it was demolished. Are new buildings, with their overdesigned architecture, permanent layouts and expensive construction costs, more successful than temporary ones? Although Stata’s curvy walls and playful layout aim to inspire the same qualities of creativity and collaboration that Building 20 inspired, I do not think they bring the same level of extemporaneous thought. While a building like Stata has an interesting layout and striking design, it is ultimately planned. Building 20 was successful because it improvised: it tried, failed, and tried again. ◈ 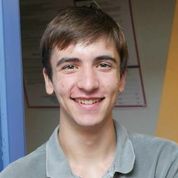 Michael Holachek is a sophomore majoring in Electrical Engineering. He loves to wake up early, listen to jazz music, and run around Boston. As a writer, he is inspired by imagist poetry and historical fiction. Although Michael was born in the U.S., he has lived most of his life in Eastern Europe. His most vivid memories involve drinking black tea on the overnight train from Moscow to St. Petersburg, and biking along the Vltava River just outside of Prague.