It’s the usual Monday morning. I’m dressed in my school uniform, eating breakfast, and watching the news with my mom at the kitchen table.  They run a segment about gay rights. It talks about a protest led by a pro-gay organization that occurred at the capitol the day before. I smile, thinking to myself that maybe things are going to get better in Puerto Rico. Sadly, my optimistic mood is instantly ruined by my mother’s face, which expresses disgust and disapproval. “Maricones de mierda, creeyendose que merecen ser tratados igual que la gente normal.” Which roughly translates into: “Freaking homosexuals, thinking that they deserve equal treatment as normal people.”

As always, I ignore her comment and continue eating my cereal. I mean, after seventeen years of hearing homophobic remarks, one gets used to it.

I get my backpack and head out to school. Surprisingly, dealing with my parents wasn’t the worst part of my day. At least in my house, I could partially be myself.

I arrive at school. Scratch that.

He fakes a smile.

“So, did you have fun at the party last Friday?”

He stutters a faint-nervous laugh. “No….”

Immediately, another friend: “Of course he doesn’t, you know he doesn’t play for our team.”

Like a deer in the headlights, his eyes widen. Crap he thinks to himself. What should I say? Don’t stay quiet. They’re all looking at you. Say something, dammit! “No! It’s just because I like Andrea and well, you know…”

His friend rolls his eyes. “Whatever you say, man.”

The bell rings. Sigh, that was close, Sebasthian thinks as he heads to his meeting with the guidance counselor.

Every day was the same. I wasn’t Sebasthian, I was Sebasthian. A guy who was into sports, cars, and girls. A guy who had a crush on some girl named Andrea. A guy who pretended to be someone he was clearly not.

“My life was basically a play about someone else, and I had the leading role.”

But, I didn’t have a crush on Andrea. I didn’t like sports. My knowledge about cars was the same as my knowledge of quantum mechanics. I never went to church out of my own will and didn’t care that much about God. Most importantly, I didn’t like girls. My life was basically a play about someone else, and I had the leading role. Each day I grew more and more tired, and I knew that I had to get out of there.

But, I didn’t have an escape. There was nowhere and no one to turn to. I had to keep this all to myself, bottle it up out of fear. The risk of my parents finding out and doing God knows what was too much for me. I had read all sorts of horror stories about people getting disowned by their families after coming out, so I had to play it safe, no matter how much it hurt.

“Hi, Sebasthian. I see that you’ve indicated interest in the possibility of studying abroad. Where are you planning on applying?” asks the guidance counselor as he sits down in her small, cramped office. “I… I don’t know,” he murmurs with his head fixed towards the floor. “Well… what do you want to study?”

He ponders for while. Well, I’ve always enjoyed messing around the lab, mixing random things and making stuff explode. ”I think I’m leaning towards Chemistry.”

She opens a drawer, takes out a paper and hands it to him. “Excellent! Here are the top 25 universities in Chemistry. Good luck!”

Wait, that’s it? You’re not going to give me any other advice? OK, whatever. He stands up and exits her office, more misguided than he was before. The day goes by and seven and a half dreadful hours later, he gets home.

At first, I didn’t know how I would do this. I had no idea of how the application process worked. However, it was clear that this was my only possible escape.  I researched each school on the list, learning every single detail about them. When I stumbled upon MIT’s admission website, I decided to browse through the blogs. After reading some entries, I typed “lgbt” in the search bar and with this I soon learned about the diversity and openness of MIT. There was the Rainbow Lounge, Senior Haus, G@MIT, the “Living Pink” guide and many more resources that were unmatched by any other university in the US. Furthermore, it didn’t hurt that it was also ranked number one in my department of interest, Chemistry.

MIT was the complete opposite of my home. It seemed like a place where I didn’t have to pretend anymore, where I could be Sebasthian and not Sebasthian. It was my escape, and I knew I had to go there. Unfortunately, the odds were against me. With only 1 out of 10 applicants being admitted, I had to give it my all. I spent so much time thinking about my application and all of its logistics that I didn’t type my first essay until seven days before the deadline, and I had my interview the day after Christmas.

With all of that done, all I could now do was wait. Every day was as monotonous as the one before. Get up. Go to school. Fake it. Go home. Tolerate.  Sleep. Repeat. MIT was my hope, the one thing that kept me going, and without it I probably would’ve lost it. And so I kept faking each word I said to my friends, I kept tolerating every single ignorant comment that came out of my mother’s mouth, I kept believing that it would one day get better.

6:28 P.M., March 14. Every bone of my body was filled with anxiety. I was sleep-deprived and as nervous as I had ever been in my life. Was I going to be able to escape and be free, or would this play never end? The answer lay beyond the simple click of a button. Here goes. I stared at the screen numbly until my decision appeared before me. I became overwhelmed and tried to read it all at once. “You stood out…” Reading that was all I needed.

Everyone I knew congratulated me. My parents and friends were proud of me. Liberty now seemed tangible and reachable, and the days stopped being monotonous.

April 14. I’m here. It’s CPW. My eyes try to survey every little corner of the Infinite Corridor. “You are welcome here.” It all feels so different and surreal. Is this really happening? I take my first steps in 77 Massachusetts Avenue optimistically.  After receiving an orientation booklet whose pages contain more events than the days could hold, I decide to check out the Rainbow Lounge. While entering, I immediately realize something. I’m free. No longer do I have be Sebasthian, no longer do I have to fake it, no longer do I have to tolerate.  Here, I am able to be myself.

“Hi! How are you?” says Abigail Francis, director of LGBT services at MIT.

“What’s your name? Where are you from?”

“Oh, that’s awesome! Very nice to meet you, Sebasthian,” Abigail says with a big smile on her face. “Well, as you probably know, this is the Rainbow Lounge, which serves as a meeting space and support network for all LBGT-related activities. You’re always welcome to chill here, and if you have any questions, feel free to ask!”

Every single person I meet at the Rainbow Lounge is like her: completely accepting and supportive of who I am. Some of them have even been through the same situation I have. They show me that it “does get better.” People outside the Rainbow Lounge are just as accepting. They don’t care that I am gay, but instead accept each little quirk I possess. It soon becomes obvious that MIT is the place where I belong.

June 15. “Which are you going to choose?” asks my mother. I know how she is going to react when I tell her that I want to live in Senior Haus, but tell her anyway.

“WHAT?! Absolutely not! I heard stories about that place. You’re not going to the world’s top institution to live in some drug-infested place. I don’t want them to contaminate you.”

I bite my lips resentfully, knowing that this is a battle I cannot win.

“Why don’t you pick a nice place like Maseeh instead?”

Ew, is the first thing that comes to mind. I would definitely not fit in there.

Anger fills me up and I tighten my fists. “Fine.” I go to the dorm lottery portal and rank Maseeh as my first choice and Senior Haus as my last.

“Much better,” taunts my mother as she leaves my room. 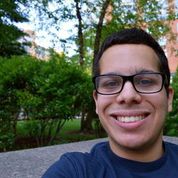 Sebasthian Santiago is a member of the Class of 2017 majoring in Chemistry and minoring in Biology. He comes from the small island of Puerto Rico and has a perpetual love for chemistry, Taylor Swift, and golden retrievers. His dreams include curing cancer, learning how to drive, visiting France, and taking a selfie with Obama. After MIT, he hopes to get a PhD and to become either a researcher or a teacher (or both). In his free time Sebasthian enjoys taking long walks, hanging out with friends, and binge watching random TV shows on Netflix.
Assignment by Lucy Marx – On the Road to MIT