Since ancient times, humans have enjoyed a mystical relationship with “magic mushrooms” containing the hallucinogenic compound psilocybin.  Rock paintings from the Sahara desert that date back at least 7000 years depict mushroom gods and cult-like rituals, indicating to some historians that psilocybin mushrooms were used in deity worship at the time (De Borhegyi 2012).  Spanish missionaries who came to the New World wrote about religious uses of psilocybin mushrooms in the sixteenth century (McGraw 2004), and recreational consumption in the Western world popped up in the late 1950s along with the hippie movement.  In 1971 the United States outlawed the possession of psilocybin, and research into the compound did not begin until relatively recently.  Psilocybin is classified as a Schedule I controlled substance, meaning it has no accepted medical use, and possession is considered a criminal offense.  However, new research, along with traditional practices among indigenous peoples, suggests that this magic mushroom may lead to a magic cure for a wide range of ailments such as obsessive compulsive disorder and cluster headaches.

“Psilocybin is classified as a Schedule I controlled substance, meaning it has no accepted medical use, and possession is considered a criminal offense.”

Psilocybin is a psychotropic drug that acts on the central nervous system to produce its effects.  Users eat the mushrooms and begin to “trip” within thirty minutes or so.  Hallucinations and distorted perception are the most common effects (Puiu 2011).  People tripping on mushrooms often see different colors and experience time dilation and intensified emotions.  These intensified emotions can be positive or negative, but they are often described as euphoric.  Many users report coming to life-changing revelations while tripping on magic mushrooms, and psilocybin is often referred to as an entheogen, or spirituality-enhancing substance (Tierney 2010).

However, mushrooms can also be dangerous.  Although there are no reports of deaths from psilocybin, a study in Behavioral Neuroscience reports several cases of severe psychosis induced by magic mushrooms, and there is evidence that tripping even once can alter a person’s brain structure by creating new links between neurons.  A 2011 study by Johns Hopkins School of Medicine researcher Katherine MacLean found that one dose of psilocybin induced long-term changes in an adult’s personality, with 61% of subjects reporting increases in “openness” one year later.  Openness is a scientifically defined and quantified factor of human personality that measures capacity for intellectual curiosity and creativity.  According to MacLean, this is one of the first pieces of evidence that adult personality can be altered, as personality is usually considered to be set by high school.

Psilocybin works by binding to the same receptors in the brain as serotonin, a neurotransmitter that is widely thought to contribute to happiness.  Indeed, modern antidepressants such as Prozac belong to a category of drugs called selective serotonin reuptake inhibitors, or SSRIs, which prevent serotonin from being reabsorbed so it sticks around for longer.  When psilocybin binds to these receptors, its distinct physical structure attaches in a slightly different configuration, thus activating them in a different way than serotonin so as to increase cortical excitability (Kometer, et al, 2013).  Cortical excitability is the ability of neurons to fire in the cortex, a part of the brain that governs emotions and thought processes, so this increase in activity leads to the flood of thought and emotions associated with psilocybin.  Indeed, a study in Human Brain Mapping by German scientists from Goethe University recently found that psilocybin causes increased activity in all of the more primitive regions of the brain linked to emotional thinking (Tagliazucchi 2014).  Several distinct regions in this part of the brain (such as the hippocampus and anterior cingulate cortex) are activated at the same time, similar to the pattern of activity during a dream.  But the study also found that the subjects on psilocybin had more uncoordinated activity in the parts of the brain linked to high-level thinking and self-consciousness.

“Psilocybin’s unique ability to bind to serotonin receptors, as well as other receptors that scientists do not fully understand, has led to a myriad of potential medical uses.”

Psilocybin’s unique ability to bind to serotonin receptors, as well as other receptors that scientists do not fully understand, has led to a myriad of potential medical uses.  In 2010, Dr. Charles Grob, a Harbor-UCLA Medical Center psychiatrist, published a study in Archives of General Psychiatry that shows psilocybin has the potential to reduce anxiety in advanced-stage cancer patients.  The study focused on 12 patients who received two sessions each, one with psilocybin and one with a placebo.  Researchers found that with a fairly low dose of psilocybin, patients reported feeling less anxiety and needing less pain medication.  Dr Stephen Ross, the clinical director of New York University Langone Medical Center of Excellence of Addiction, told the LA Times that this was a “landmark study… the first time a paper like this has come out in a prestigious psychiatric journal in 40 years.”

But psilocybin doesn’t just alter feelings and perceptions.  Research published in the journal Experimental Brain Research this July by University of Florida scientists suggests that psilocybin can actually restore damaged brain cells.  The scientists trained mice to be fearful of an electric shock, and then administered some of them psilocybin.  They found that the mice on psilocybin were more relaxed and less fearful, but they also noticed that the psilocybin restored partially destroyed brain cells.  Study author Dr. Juan R. Sanchez Ramos suggests that this is promising enough to merit further research into using psilocybin to generate new brain cells, as well as using psilocybin to treat post-traumatic stress disorder, or PTSD, since the fear in the mice resembled PTSD.

Small-scale studies on depression and alcoholism have shown that psilocybin may be useful for treating these diseases as well.  A 2012 smoking cessation study by Michael Bogenschutz from the University of New Mexico, published in the journal Drug Testing and Analysis, found that psilocybin and counseling had much better success rates than counseling alone.  Thirty-nine patients in the experimental group were given psilocybin and then underwent traditional talk therapy for smoking cessation.  This mechanism of using psilocybin to enhance the effectiveness of traditional therapy could be useful in treating a wide variety of ailments that are currently primarily treated with talk therapy and counseling.

“Now patient groups across the country are turning to illegal magic mushrooms to cure their headaches, and many claim they have tried everything out of desperation, and psilocybin is the only thing that works.”

All of this research is promising, but one group of patients has especially high hopes for psilocybin.  Cluster headaches are a rare ailment that consist of severe headaches on one side of the head, often around the eye.  The pain has been described as worse than childbirth (Shaw 2010), and the suicide rate for cluster headache sufferers is 20 times the national average according to a report published by the Multidisciplinary Association for Psychedelic Studies (MAPS).  The headaches come in groups, or clusters, and these clusters can last from days to weeks to months and medicine is generally not very effective.  Now patient groups across the country are turning to illegal magic mushrooms to cure their headaches, and many claim they have tried everything out of desperation, and psilocybin is the only thing that works (Panne 2014).  Users report that less than a quarter of what would be considered a recreational dose is enough to end their cluster headaches, in some cases permanently (Panne 2014).

Bob Wold, a sufferer of cluster headaches, came across psilocybin and was amazed when it cured the headaches he suffered from for 30 years.  So he started ClusterBusters, and set out trying to contact scientists to help him with his cause.  After contacting several scientists, he managed to pique the interest of Dr. John Halpern, an assistant professor of psychiatry and Director of the Laboratory for Integrative Psychiatry at Harvard University.  Halpern had heard about patients using psilocybin to treat themselves for cluster headaches, and decided to do some research.  Because using a hallucinogen poses significant regulatory challenges, Halpern turned to an inactive analogue of LSD, 2-bromo-LSD.  Clinical trials have proved successful, and patients are going into remission after years of cluster headaches (Panne 2014).  This may be the first real breakthrough inspired by psilocybin.

“We’ve come a long way,” Wold told The Daily Beast earlier this year.  “When I first started ClusterBusters, I couldn’t even get doctors to return an email if it included ‘psilocybin’ in the email.  I don’t have that problem anymore.  We’re accepted as members of the biggest headache societies and medical groups.  They’re coming to our conferences and making presentations and they’re interested in what we’re doing.”

“Despite all of the promising breakthroughs scientists are making, it is still difficult for them to study psilocybin due to restrictive laws.”

Despite all of the promising breakthroughs scientists are making, it is still difficult for them to study psilocybin due to restrictive laws.  Because psilocybin is classified as a Schedule I drug, the federal government does not recognize any legitimate medical use of it.  Due to this, scientists need difficult-to-obtain permission from the Drug Enforcement Agency to study the compound.  The process is arduous and time-consuming, and off-putting to many scientists.  There have also been claims made that pharmaceutical companies have sabotaged research into hallucinogens, including a letter published in the American Journal of Psychiatry by C.C. Dalhberg in 1968 that outlined how government officials and pharmaceutical executives cancelled ongoing research into hallucinogens and successfully discredited legitimate research.  While there is no proof of this, many people today point out that there is no economic incentive to study these drugs, as they are natural and cannot be patented.  Thus there is undeniably a financial incentive for pharmaceutical companies to develop synthetic drugs they can patent and profit from, rather than explore more natural remedies.  As other Schedule I compounds, including marijuana, LSD, ibogaine, mescaline, and MDMA are being found to have potential to cure diseases such as PTSD, depression, Alzheimer’s, and even cancer, maybe it is time to rethink the way we control these substances. 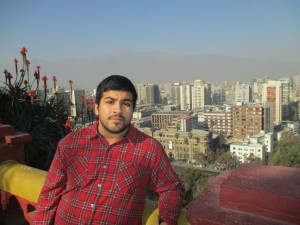 Sean Soni is a member of the class of 2017, and is double majoring in math and computer science. He is a member of the Boston Mycological Club and enjoys foraging for, identifying, cooking, and of course eating a wide variety of edible wild mushrooms. He recently returned to MIT after founding an eTutoring company and opening up a fish market in Columbia, SC.