I had my arm sticking out awkwardly in front of me, dragging a 4B pencil across a large newsprint sketchpad. I was instructed to make lines this way, so I did—I drew lines and lines and lines, top to bottom, bottom to top, left to right, right to left, and diagonal both ways. I made lines diligently at first, keeping my hand stiff like a soldier’s, but as time passed I felt my arm aching and my lines became waves, yearning to bend off the page.

I was learning foundational drawing at the Vision21 art studio in Irvine, California, the summer before eighth grade. I wanted to be an illustrator, someone who imagined epic fantasy worlds and could make them come to life with just pencil and paper. I had sketched and doodled in my free time since before I started elementary school, so I expected studio art lessons to feel quite natural. But this lesson was different from any other lesson I had experienced. At school, class always started with lecture first, followed by practice exercises and homework. Algebra had to be taught before it could be applied; the scientific method had to be explained before it could be performed. So it felt strange for me to be sitting in front of my sketchpad, drawing simple lines for no previously explained reason, wondering whether the meaning of the lines would be revealed to me at the end. Directionless and a little lost, I looked around me, but across the room, the other students seemed to be paying no attention.

“The studio was a chalky white box, a place that seemed to be a block of art material itself.”

Even my surroundings felt foreign. The studio was a chalky white box, a place that seemed to be a block of art material itself. Smudges of charcoal and hints of color covered its walls; pencils of different degrees of softness rolled on its tables. Slightly off the center of the studio stood a rectangular pillar with a ring of dots around its middle. Looking closely, I discovered the dots were actually sketches of eyes, both opened ones and closed ones, drawn in pencil but having the feeling of being real and alive. They were beautiful and bizarre, like the high school students sitting near them.

One of the students I remember was a slender, petite girl with smooth black hair down to her waist. I recall the lines she drew—smooth, precise, and delicate like she was, almost as if they mirrored her as a person. Her drawings were beautiful—all the right shades and colors. To me she was perfect, someone who drew in all the ways I wanted to be able to draw. But together, she and the other students and the pillar felt almost a world away from me. Alone in the corner where I sat with my sketchpad, I didn’t feel like I belonged with them.

Four years later I returned to Vision21, this time just wanting to improve my drawing. I was apprehensive about what kind of exercise I would be given after such a long gap since my last lesson, but the first day back my instructor just asked me to repeat a contour line drawing similar to one I did four years ago. I had to draw my non-dominant hand in different positions, using solid pencil lines, without shading. Feeling comfortable with the familiar task, I held out my left hand in the light, and positioned my right hand over the blank sketchpad. I opened and closed, gripped and twisted my left hand to make models while my right hand made outlines to match them.

After I finished, my instructor and the studio manager came over to look at my work. My instructor was pleased; she gently tore the page off my clipboard and told me she liked it enough to hang it on the wall where all the displayed drawings usually go. I felt a bit hopeful—perhaps this meant I still had the skills I learned four years ago. Perhaps this meant that drawing indeed came naturally to me, and that I could one day still become the illustrator I had once dreamed of becoming. Still I knew it would never be; I had focused my studies on math and science since junior high and planned to be an engineer, which would be a far more practical career to pursue than illustration. My parents, of course, made sure to push me towards the right path along the way.

“You should study art,” my instructor said, after she hung up my drawing. Surprised, I smiled uncertainly, and laughed a little. But the studio manager was also nodding.

“Really,” she pushed. “You should.” I mumbled something. She asked me what year I was. I replied I would be beginning senior year in high school in the fall. She asked what I planned to do. I replied that I would study engineering, computer science in particular. She thought about it for a second.

“What’s your GPA?” she asked suddenly.

“4.7 out of 4.0?” my instructor repeated in a loud voice, exchanging understanding looks with the studio manager and confusing me greatly. “It must be because you’re smart…Yes, it’s definitely because you’re smart. That’s why your parents want you to do engineering.”

I cringed. Unfortunately, the rest of the class turned their heads. Who has a 4.7 GPA? You do? Whoa. Wow, that’s really good. Normally I would have been proud, but I felt hope deflating inside me. Did my GPA somehow disqualify me from studying art? The students around me in the Vision21 studio were my age now, applying to art school, but I still felt uneasy around them, like I wasn’t speaking the same language as they did.

“While others sat calmly, moving their pencils in measured strokes, I jerked my hand across my paper pad.”

So when figure drawing began a week later, I felt unsure of myself as I sat in a half circle around the posing model along with the other students. Each class started with drills: two minutes to sketch the nude model for a total of five poses, then five-minute sketches, then twenty-minute sketches, and finally an hour of dedicated sketching, including details and shading. While others sat calmly, moving their pencils in measured strokes, I jerked my hand across my paper pad, frantically making lines and loops until our figure-drawing instructor walked over. He was a young man with dirty blonde hair who wore plaid shirts and graduated from the Rhode Island School of Design, the one art school I had heard of at that time due to its prestige. I froze as he came over, my wrist refusing to move under the strong glow of the yellow lamp nearby, fearing that I would make a line that was too obviously bad. I expected him to criticize my sketches, but instead he put a hand on my wrist, guiding my hand and pencil in strong, smooth movements. He took my pencil to point arrows at flaws in my sketches. He drew curved lines to illustrate a person’s posture, and rectangles and cylinders to shape the body. He drew sharp pinched lines slowly and long stretched lines swiftly to capture the essence of a person’s posture and the way the body bended. Then he handed my pencil back to me.

“Exaggerate movement and throw away all detail,” he reminded everyone as he walked slowly towards the other side of the studio. He settled down next to another student’s sketchpad. “What’s that bump there?” he asked her. “Oh, I know, this is a bone on the vertebrae. The seventh bone to be exact.” I almost laughed, suddenly feeling relief spread through me. “Leave that out. That’s like me telling you to draw a car, and you drawing it…starting with a single screw in the tire.” So it didn’t matter, I thought to myself with resolve, that I felt alienated by the other students or that I didn’t have a typical high school GPA for a college art major. I still wanted the same thing as everyone else in the room did—to be a good illustrator. I felt myself transported back to foundation class again, drawing the bare bones of my existence, lines across blank pages.

In math and science classes, lecture always explained how and why. Lecture gave meaning to the work that followed. Only after I understood the theory was I be able to move from problem to problem, following the theorems of math and laws of physics.

But here, learning meant moving; no theory. It is daunting, and even at a young age I felt the leap I had to take in moving my hand and pencil across the page in front of my instructor—it required almost an ultimate trust in the self. I had to make and know my own meaning through these uninstructed pencil marks. I know now the bending lines and shapes were a part of me that still had lives of their own; forms that would not be pressed into the neat lines I thought I could make them be.

Yet they felt right, and I felt myself in the lines I drew. As my figure-drawing instructor walked around the room to watch the other students, I pressed my pencil firmly to my sketchpad, making strokes in the direction I felt most accurately illustrated the model’s current pose. I was determined to do it over and over again until I could shape the figure to the best of my ability, with just the lines of my pencil. 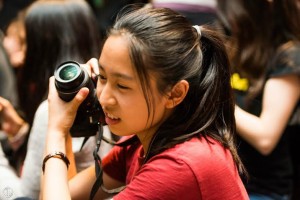 Elisa Young is an undergraduate in the MIT Class of 2017 studying computer science. She is active in MIT’s yearbook and photo club, Technique. In her free time, she enjoys taking and editing photos on her own, drawing, eating curry rice, and thinking about the world. She often writes in order to organize and reflect upon her thoughts.

Elisa has contributed both an essay, "Pencil Lines," and a graphic memoir, "Remembering How to Fly," to Angles 2015.