Home » Technological Stagnation and Knowledge Deprivation: What Will Happen to Particle Physics in the U.S.?

Technological Stagnation and Knowledge Deprivation: What Will Happen to Particle Physics in the U.S.?

Last year, Laurence G. Yaffe, a professor of physics at the University of Washington, was having a conversation with his colleagues about their recent performance reviews, a yearly analysis of their progress conducted by the United States Department of Energy (DOE). For these physicists, whose research focuses on determining the existence and understanding the interactions of fundamental particles, a performance review determines whether or not their research proposals receive funding.

As the conversation continued, the physicists shared that they felt their recent reviews had been worse than in previous years, something that they had heard from others before. Out of curiosity, Yaffe decided to send a few emails to theory groups at other universities, like the Massachusetts Institute of Technology (MIT), California Institute of Technology, and Brown University, in order to see how common this scenario was.

Out of the twenty-four research groups Yaffe (2014) surveyed, all but one group experienced significant funding decreases. Without financial support, these fields will continue to see declines in graduate students and postdoctoral positions.

His results, uploaded to the U.S. Particle Physics: Education and Outreach website in February, revealed that these weren’t isolated cases and came with grave consequences. In the past two years, the groups reported reductions in total DOE funding averaging 23% and declines in postdoctoral positions over 40% (Yaffe 2014). Many graduate students, Yaffe reports, who initially express great interest in particle physics, are soon lost to other fields that are able to better support them.

“Though federally funded research may seem unrelated to our everyday lives, particle physics research is one field of science that has repeatedly yielded contributions to society.”

Having worked with the DOE’s Office of High Energy Physics (OHEP) three years before, Yaffe noted that the DOE had changed the way proposals were reviewed during his tenure. One goal of the new process was to ensure that resources would be available for newer research, and from the recent decisions, this goal is being accomplished by reducing resources that were previously available to the field of particle physics. However, this egalitarian redistribution of funds could have grave societal implications.

Though federally funded research may seem unrelated to our everyday lives, particle physics research is one field of science that has repeatedly yielded contributions to society through its advancements in technology, communication, and knowledge. For example, touch screens were first designed and implemented by physicists at the European Center for Nuclear Research (CERN) to help simplify the array of buttons, dials, and switches in their control rooms, and today, are essential components of many household appliances. In addition, the World Wide Web was created at CERN to share data with scientists across the world, but has since become a more universal communicator available to the general public (OHEP 2014).

These contributions to society are essential components of our lives and shape the way each generation grows and develops. It is true that particle physics has historically received a generous amount of Federal support, but society has reaped many benefits from these efforts. If our once loyal support is withdrawn, this could bring societal progress to a staggering halt.

To gain a clearer perspective of the situation, I sat down with two of MIT’s physics professors, Jesse Thaler and Michael Williams. “It’s been amazing how far we as a field, collectively, have gone in terms of understanding the universe,” says Thaler, “and it’s also been amazing how simply just saying, ‘huh, I wonder how the universe works?’ ends up having societal implications that you never envisioned.” Thaler is a theoretical physicist, and his work focuses on the Standard Model of particle physics, which explains how the fundamental particles of the universe interact with each other and generate the behaviors we observe in nature. This is a fairly recent chapter in science, and its creation arose with the discovery of the first fundamental particle.

In 1897, the physicist Joseph John Thomson revealed that atoms are made of charged particles by using a magnet to deflect a beam of electrons traveling inside a cathode-ray tube, a tube with a positive end and a negative end. This cathode-ray tube was the first particle accelerator, the heart of modern particle physics experiments (Young 2014). As years passed, particle accelerators sprung up across the world, growing bigger and more powerful each decade.

This has culminated in the world’s most cutting-edge technological marvel to date, CERN’s 27-kilometer long Large Hadron Collider (LHC). The LHC consists of 5 particle detectors and employs several thousand scientists, engineers, and students from across the world (CERN 2014), including professor Williams. Unlike Thaler, Williams is an experimental physicist and is involved with the LHC detector called LHCb. He remarks that there exists a noticeable delay between when new technology is developed and when society is able to benefit from that technology, and particle accelerators provide a good illustration of this phenomenon.

When early particle detectors became obsolete as research devices, they were repurposed for other uses, such as conducting the first Positron Emission Tomography (PET) scans. PET scans are crucial in determining whether cancerous tumors have spread. (Image: Wikimedia Commons)

As particle accelerators became too outdated for research, they assumed new roles to benefit society more directly, such as uses in the medical field. Old particle detectors are now used in PET scans to help doctors find signs of cancer. Furthermore, hospitals use specialized accelerators to take x-rays or create heavy ions used to treat their patients (OHEP 2014).

Of course, this is not the only technology made available to society by advancements in particle physics. Not too long after J.J. Thompson discovered the electron, particle physicists proposed the theory of quantum mechanics to explain the particle’s peculiar behavior. This new theory allowed for a better understanding of atomic structure and led to the creation of a new type of material called the semiconductor.

In the past six decades, these new materials have become essential components of almost all modern electronics, ranging from computers at the LHC to the TVs in your living room (Young 2014). Virtually all of modern technology exists because of particle physics research conducted several years ago, but this is only the tip of the iceberg. New technology is already being implemented at the LHC that has the potential to make our lives easier than any electronic contraption ever has.

Most electronics are made of semiconductor materials like the above integrated circuit, whose creation was only possible with the advancement of quantum mechanics. As the technology improves, integrated circuits help make our household electronics smaller and more elegant. (Image: Pixabay)

To collect experimental data, the LHC accelerates large bunches of protons and collides them at the various detectors. Each bunch is a group of about a 100 billion protons racing around at speeds near the speed of light. “That’s like the same number of stars in the galaxy,” Thaler exclaims, “[we] take these galaxies of protons and slam them together.” Each detector must then sift through the millions of particle collisions and determine which collisions have data worth recording, a process they refer to as “triggering”.

During his postdoctoral work in London, Williams developed Artificial Intelligence (AI) software to help data collectors with that task. Millions of terabytes of data would be required to record collision event data if it were all kept, so triggering is necessary to deal with the LHC’s data collecting rate. The software runs on a collection of Central Processing Units, called a CPU farm, next to the experiment that helps with triggering.

Currently human intervention is still necessary for triggering, but Williams is leading a project to establish a full software trigger at the LHC by 2020. He explains, “we’ll basically be taking the whole LHC data rate straight into a CPU farm and doing the analysis in real time, which no one’s ever tried to do before, but we’re pretty sure we can do it.” In the decades after 2020, the advancements in AI software made at the LHC could become available to the general public, but if support for this research declines, society could miss out on a valuable opportunity.

“Ultimately, the goal of particle physics research is to better understand the world we live in.”

Ultimately, the goal of particle physics research is to better understand the world we live in, and in this respect, there remains much more work to be done. Thaler remarks, “In other fields of science, you don’t say ‘oh, I’ve already discovered DNA. Nothing more to do.’ Well, come on.” On the contrary, physicists like Thaler and Williams hope that data from the LHC disagrees with their best theories because if that were to happen, then the opportunity for new physics arises. “We think of what we’re doing as being this incredible intellectual exercise of

trying to discover how the world works,” says Thaler, “and what we’d like to provide to society is an understanding of its place in the universe.”

This understanding yields the biggest societal benefit of all, curiosity. “Why do people grow up to study science and engineering?” Williams asks, “They study it because of the crazy, fantastic, out-there results that come out of things like particle physics.” Ideas of black holes, the Big Bang, or the Higgs boson spark interest in young children and motivate them to study math and science. This is what ensures that there will always be a new generation of students eager to learn from and work at the research facilities like the LHC.

However, as evidenced in Yaffe’s study, when funds are cut, these students are lost to other fields that can offer better opportunities. According to Williams, graduate students consume the largest portion of funding that goes into the LHC, but it is these students who take the experiences and skills they obtain and use them to become leaders in engineering, finance, or entrepreneurship after they have left.

“There’s plenty of people who are excited about particle physics,” Thaler reveals, “people in the general public who are excited, obviously scientists who are excited about it, and the field is roughly the size that it should be.” The challenge that they face now is maintaining that size, and if we hope to continue to reap the benefits of their research, it’s up to us to show our support for it. 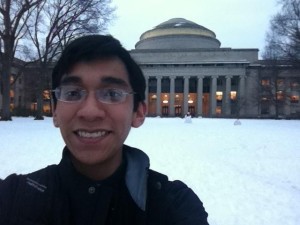 Joel Ivan Solis is a Mathematics major and a member of the Class of 2018 from Brownsville, Texas, a city at the southernmost corner of the state. Having lived through summers hot enough to fatigue him, he enjoys Massachusetts winters and spending snow days with friends. His interests range from browsing wiki pages on European history to computing trigonometric identities for leisure to tinkering with a Raspberry Pi and some old electronics.