Home » The Ultimate Drug: Taking the Edge off Performance Anxiety

The Ultimate Drug: Taking the Edge off Performance Anxiety

I peer out at the crowd from backstage, my hands trembling slightly, heartbeat racing. I’m about to play live for a thousand people, in a concert that’ll get recorded and aired on NPR. Luckily, the show producers already have a solid tape from the dress rehearsal, so a few deep breaths calm me before I walk out and take my bows. Although I’m still shaky, I have faith in the audio engineers, who can use that backup recording to patch any major mishaps before airing the show nationally. This eases much of my nervousness, letting me focus on entertaining the audience and enjoying my time in the spotlight.

Performance anxiety, commonly known as stage fright, afflicts millions of people: actors, musicians, athletes, orators, and many others in the public eye. The symptoms include trembling, shortness of breath, dry mouth, and dizziness, often to a point of debilitation; one violinist described how her colleague would shake so hard onstage that the bow would fly out of her hand (The Strad). I am lucky enough that the nerves don’t paralyze me completely. Others are not so fortunate.

“In the days before beta blockers, performers often simply relied on drinking alcohol or smoking marijuana for similar effects.”

Enter beta blockers, a class of drugs commonly prescribed to patients with cardiovascular problems and high blood pressure. By slowing nerve impulses to the heart, they counteract the effects of adrenaline and lower heart rate, reduce tremors, and produce a calmer state of mind. In addition to targeting genuine health problems that heart disease patients suffer, beta blockers can act as a miraculous anxiety cure for athletes and performing artists alike; in the days before beta blockers, performers often simply relied on drinking alcohol or smoking marijuana for similar effects (Miller, “Beta blockers”).

My first time hearing about the drugs came at the age of 16, during my first orchestral music festival. “In my experience, it’s not difficult to get access to beta blockers,” explained our lecturer, a professional oboist in New York. “You tell your doctor, straightforward: my body goes haywire from adrenaline before a performance. It’s getting in the way of my job and doing what I love.”

I couldn’t believe what I was hearing: a professional in the orchestral world, not only telling a roomful of high school and college students about drugs, but how to obtain them?

I’d be lying if I said her words haven’t followed me for the last two and a half years, haunting me in the days leading up to recitals and especially auditions. Natural sources of beta blockers include bananas, which I eat faithfully before any important performance; following the lecturer’s advice would simply be raising the dosage that bananas naturally provide. Many artists and athletes take this extra step and obtain prescriptions through physicians, or more commonly buy the pills from friends and colleagues (Kingsbury, “Performance Enhancing Drugs”). Yet some inner force, be it my own pride or conscience, has stopped me every time I’m about to pick up the phone and ring the doctor’s office.

Criticisms abound on the use of beta blockers to treat stage fright. The most extreme positions liken the drugs to steroids in sports, which give the user an unfair physical advantage over others. Several athletic associations and tournaments, such as the International Olympic Committee (IOC) and National Collegiate Athletic Association (NCAA), have listed beta blockers on their banned substance lists for certain sports. Their use is carefully monitored and punished: in the Professional Golfers’ Association (PGA), for example, a competitor must prove a documented medical condition to request an exemption. At the 2008 Beijing Olympics, North Korean pistol shooter Kim Jong-su had to return his medals after testing positive for propranolol, a beta blocker (Pennington, “Heart Medications”). Yet proponents of allowing these drugs into professional realms claim that they do not remove mental nervousness, but simply eliminate the physical symptoms, much as a migraine sufferer would take an aspirin to relieve a headache. Beta blockers cannot make a technically inept performer suddenly ace all of his difficult passages, but the drug could enable one who has prepared diligently to showcase his best self in a recital or audition, free of nervous tremors and sweaty palms.

“By producing an artificial calmness, beta blockers dull the general expressivity and emotional passion of a performance.”

Then there are the subjective judgments on how beta blockers reduce performance quality. Classical violinist Angella Ahn insists that her Juilliard peers would lose some of their performance intensity while taking the drugs. New York violinist Andrew Holland describes that, when playing, he felt “strangely disconnected from [his] body, as if it was responding a bit too slowly” (The Strad). Other observers note that, by producing an artificial calmness, beta blockers dull the general expressivity and emotional passion of a performance, which adrenaline usually helps to enhance. In essence, these drugs may very well cheat the audience of an otherwise more exciting experience.

Furthermore, the drug is not benign. While beta blockers are nowhere near as harmful or risky as anabolic steroids, they can carry unwanted side effects just as any other drug. When taken by a young, healthy individual with no symptoms of heart disease, heart rate can become slow and weak, leaving the user tired, dizzy, and prone to fainting. The drugs also constrict small blood vessels, reducing circulation to extremities and causing cold hands and feet. Airways can narrow, resulting in wheezing, making beta blockers dangerous for individuals with asthma (The Strad). Most of all, the risk of psychological dependence runs high—what’s an artist or athlete to do when she can’t even go onstage or onto the field and give a genuine performance, free from the help of beta blockers?

Use of these drugs on the classical music circuit has soared within the last 25 years. A 1987 study showed that 27 percent of professional orchestral musicians used beta blockers occasionally in performance; a 2013 report estimated that between 80 and 90 percent of professional musicians now take them before auditions (The Strad). The advent of digital recording and editing has helped this nerve-calming practice skyrocket, as performers feel increasing pressure to make each live rendition note-perfect, and cameras capture every moment for infinite replays. Professionals from various major orchestras across the United States have stated that not taking beta blockers before auditions can put a candidate at a disadvantage in comparison to the majority who do.

The taboo surrounding these drugs adds another dimension to the problem. Extrapolating from the 2013 statistics reported above, most professional and college student musicians have likely taken beta blockers or know someone who has. One friend of mine, a junior whom I’ll call Robert who is a student at New England Conservatory, admitted to me that he was seriously contemplating beta blocker usage after feeling unsatisfied and disappointed at his lack of ability to completely combat nerves at his fourth professional audition. Beta blockers “would just be a way to play more like myself in a super high pressure situation,” he said. Robert also mentioned that one of his close friends had taken the drugs for a period of time until she knew the feeling of playing an audition without crippling nervousness. Once she had internalized and memorized that feeling, she was able to stop taking them.

But Robert is just one of the dozens of talented, accomplished musicians with whom I have played; the others have never spoken of any personal prescription drug usage, whether positive or negative. I have no idea how many of my friends gave their wildly virtuosic or heartbreakingly beautiful performances under the influence of beta blockers. Even though statistics imply that most performers use beta blockers at some point, few seem willing to acknowledge that they need help for their anxiety, mostly due to the shameful stigma that revolves around using drugs to enhance human capabilities. The lecturer from my orchestral music festival, who spoke openly to a roomful of young pre-professionals about her experience with the drugs, is a rare, frank voice on the use of beta blockers in the music world.

Recent cultural trends in favor of instant gratification only serve to make beta blockers more attractive among musicians. Techniques that ease nervousness, like meditation or cognitive therapy, can take weeks, months, or even years to hone. For an industry with so few job openings and such high stakes, performers would much rather rely on documented chemistry and science, as the beneficial effects of beta blockers are guaranteed within a short amount of time. Moreover, while testing for doping has become commonplace in serious athletic competitions, drug testing of members of a classical orchestra remains essentially unheard of, flying under the general public radar that has shamed steroid users and held sports stars to pure performances. Therefore, as a significant percentage of young and old musicians alike seem to use beta blockers while rarely discussing them openly, it is unlikely that adoption of regulations would take place anytime soon.

“I often speculate about what it would have been like to try beta blockers.”

Although I don’t perform anywhere near as often as I did a few years ago, I often speculate about what it would have been like to try beta blockers. Opportunities to do so were and still are readily available to me, through friends and professionals. Yet I know if I use beta blockers once and they work, I will end up taking them for any important occasion, the same way several friends and I take caffeine pills when we have large amounts of work to finish and need to stay up long hours into the night. The pills bring all the energy from coffee or Red Bull without the calories and sugar—a pick-me-up for the frequent sleepiness that plagues many a college student.

So time after time, when I’ve felt pressure in advance of a performance or find myself slipping up onstage, I remind myself not to cross the threshold into dependency. Instead, every passionate, adrenaline-fueled solo becomes a testament to the power I’ve gained in controlling my own body and pushing my capabilities. Knowledge of my control and reach brings so much more gratification than a note-perfect rendition of a piece. Best of all, I can rest easy knowing I’ve cheated neither myself nor the audience of a soulful, genuine, human performance. 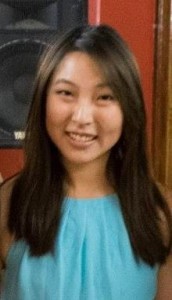 A native of Scottsdale, Arizona, Austen Yueh started piano lessons at the age of four and began her studies on the clarinet five years later. She grew up performing solos and in ensembles on both instruments, experiences which led her to the orchestral music festival that inspired The Ultimate Drug. Currently, Austen is a student in the class of 2017 majoring in course 6-3 (Computer Science and Engineering). An active member of several clubs on campus and Kappa Alpha Theta sorority, she can still be heard playing as she works towards her ultimate goal of making music for life.