Conor Cullinane: Bridging the Gap Between Medicine and Rocket Science

Conor Cullinane likes to take the least conventional path wherever he goes. Energetic and compact, Conor can be found zipping all around campus – traveling by foot, plane, scooter, boat, motorcycle, trampoline stilts, and even on moon bounce shoes. Conor’s research has evolved in a similarly unconventional way. Conor’s friends joke that all of his decisions are formed by asking himself one simple question: Is this going to be awesome? “If the answer is yes, I usually do it,” he told me, grinning, in a recent interview. Instead of taking a straight shot to a defined career goal, Conor has pursued the next most exciting opportunity in his path, which has landed him in a unique position on the interface between aerospace and medicine. Aside from being the Graduate Resident Tutor (GRT) in my dorm at MIT, Conor is a NASA Space Technology Research Fellow in the Bioastronautics Training Program, part of the Harvard-MIT Health Sciences and Technology program in Medical Engineering and Medical Physics (MEMP). The MEMP programs are unique in the way they integrate science, engineering and medicine to solve problems in human health.

Conor completed his undergraduate degree at Clarkson University in Aerospace Engineering with minors in Biomedical Engineering, mathematics, and pre-med. All of his advisors tried to talk him out of pursuing this extremely uncommon degree, warning him that it would be very hard to get into medical school with an aerospace background. Conor’s response was, “Well, I think I’ll be OK.”

“It just made sense,” he says. “Fluid flow through a pipe is very similar to blood flowing through an artery.”

It seems like the fields of medicine and aerospace engineering wouldn’t interact, considering there is no life in space and nothing extraterrestrial on Earth. But Conor, unlike his wary advisors, saw the unique connection between aerospace and medicine. “It just made sense,” he says. “Fluid flow through a pipe is very similar to blood flowing through an artery.”

At Clarkson, Conor involved himself in a variety of projects focused on human-system integration, which deals with the interaction between humans and mechanical devices. He conducted research on a vibrotactile feedback system for a powered prosthetic device designed to return ambulation to people who have had an above-knee amputation. The vibration system that his team developed allowed the amputee to feel whether his or her leg was extended or bent (proprioception) depending on the location of vibrations around the socket of the prosthetic. This cutting-edge research made it possible for people with leg amputations to be able to climb and descend stairs.

Conor thinks like an engineer but always keeps the human element first and foremost in his mind. The vibrotactile feedback system is a feat of engineering that is entirely concerned with the health of the human operator. At Clarkson, Conor reached out to the community with his work. After starting a rocket lab in the Applied Aerodynamics Lab at Clarkson, he designed a seven-and-a-half-foot-tall rocket to test control systems. The rocket was first launched in front of thousands of students as part of an outreach program.

After completing his undergraduate degree at Clarkson, Conor decided that he still wanted to pursue engineering. Instead of going directly to medical school, he found a program that would let him pursue both of his interests. As Conor says, “the program fell into my lap in a way that I wasn’t seeking it.” The Harvard-MIT Health Sciences and Technology (HST) program was perfect for Conor’s interests, allowing him to take classes both at MIT and Harvard and giving him access to the resources available from labs on both campuses.

Outside of the HST program, Conor is currently working with NASA at their Johnson Space Center in Texas to design a space suit that monitors the health of the astronaut as he or she attempts a spacewalk, known as extravehicular activity (EVA). The suit can inform the flight team whether or not a mission needs to be aborted depending on the well-being of the astronaut, which is determined from data collected from the suits (heart rate, CO2 levels, temperature, EKG and composition of atmosphere, etc.). 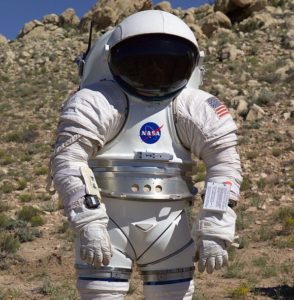 The aerospace engineers responsible for designing these suits have little to no medical training to inform their design. Conor acts as the translator, bridging the gap between aerospace engineering and aerospace medicine. The team has made progress in determining how the suit affects gait, and is working towards increasing leg mobility. They are currently working on adding multiple bearings to the hip of the Mark III Spacesuit to increase flexibility. Conor’s ultimate goal is to take care of humans—not just by keeping them alive, but also by allowing them to accomplish mission tasks.

Conor is currently writing his Ph.D. thesis on the development of a computer simulation that models an exosuit, a suit designed for extreme environments while taking into account the operator’s health. Since it is so expensive to make a space suit ($15M), it is vital to be able to predict accurately with computer models how a suit will perform before manufacturing the real version. As Conor says, “you can’t go back to the drawing board.” He looks at existing data for current space suits and extrapolates how different modifications will affect the human inside a computer-modeled suit. The simulation works with data from the suit, the human, and the environment. These factors include everything from the gravity on different planets, to the material properties of the suit. 3D laser scans are taken of the astronaut so that the simulation can determine how much pressure the human operator will experience when performing different motions. Knowing how much pressure is applied to the human can inform injury-prevention methods. The software that Conor is developing can be applied to develop higher fidelity models for any exosuit, including military soldier suits, rehab wearables for physical therapy, and other privately commissioned suits.

At this point in his career, Conor has to decide “what is the next awesome step” in his path. He is considering finishing medical school in the HST program and becoming a flight surgeon who would take care of astronauts, pilots, deep sea divers, and any other human in extreme environments. Conor is also considering entering the Pilot Physician Program and becoming a fighter pilot in the military. Though Conor is much younger than the average astronaut, his potential career path doesn’t exclude this possibility. “I’m totally a thrill seeker, so being able to strap myself to a rocket would be totally awesome,” he laughs. The options are endless at this point.

Caitlin McCandler is a Junior pursuing a bachelor’s degree in Materials Science and Engineering. She is a Minnesota native and grew up swimming, sailing, and biking, and now she is rowing for MIT’s Openweight Crew team. As a 6-foot-tall ginger, she’s fairly easy to spot strolling down the infinite. Otherwise, you can usually find her at the coffee shop near campus with a latte and pastry working on 3.024 psets.